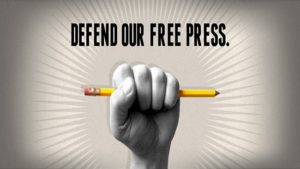 Cameroon is a dangerous place for any objective-minded journalist, a recent report by media rights group, Reporters Sans Frontières, has said.

According to the right group, many journalists in the central African nation have got into trouble with the government for venturing into certain areas of national life considered too delicate.

The 2018 Press Freedom Index released by Reporters Sans Frontières said Cameroonian authorities have imposed a climate of fear and self-censorship on media practitioners.

The index notes that the country had made a slight progress from 2017 moving from 130th spot to 129th this year. Nevertheless, journalists face huge hurdles some of which led to exorbitant fines and in some cases jail terms.

In 2014, Cameroon enacted a broad anti-terror law as part of its effort to counter the extremist group Boko Haram, but authorities are using it to arrest and threaten local journalists who report on the militants or unrest in the country’s English-speaking regions, where the Internet was disconnected for several months from January 2017 onwards.

A presidential decree in August 2017 ended legal proceedings against at least four journalists, but the laws that were used against them are still in place.

Posted by Steven Addamah on April 26, 2018. Filed under Zoom. You can follow any responses to this entry through the RSS 2.0. Both comments and pings are currently closed.