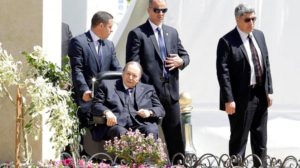 Algeria’s prosecutors have freed six generals detained on charges of corruption and wrongdoing in the North African nation.

The unexpected decision comes a week after the announcement that Algeria’s frail 81-year-old President Abdelaziz Bouteflika, who has been in power since 1999, will stand for a fifth consecutive term in elections next year.

The veteran leader has been weak since suffering a stroke in 2013. He has since travelled abroad several times to undergo medical treatment in France and Switzerland.

The president has since then made rare public appearances, usually sitting in a wheelchair.

Since independence from France in 1962, the army has either directly named the president or played the kingmaker through an “authoritarian election,” according to experts.

Posted by Khalid Al Mouahidi on November 7, 2018. Filed under News. You can follow any responses to this entry through the RSS 2.0. Both comments and pings are currently closed.