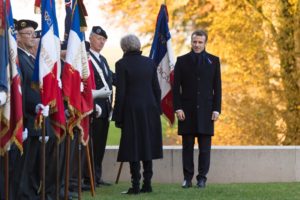 King Mohammed VI of Morocco will take part on Sunday in Paris in the ceremonies marking the centennial of the armistice that ended World War I.
Military parades, speeches, and concerts will commemorate the day Allied powers gathered with a German delegation to end the four years of fighting that left about 40 million people dead or injured.
This year, many world leaders, including US president Donald Trump will join French president Emmanuel Macron in Paris for the commemoration festivities, featuring a parade at the Arc de Triomphe, a lunch for world leaders and the opening ceremony of the Paris Peace Forum, a global gathering of leaders and civil society dedicated to international cooperation and multilateralism.
The list of attendees includes German chancellor Angela Merkel, presidents Vladimir Putin of Russia, Recep Tayyip Erdogan of Turkey, UN secretary general Antonio Guterres…
Organized by the French Ministry of Foreign Affairs and several think tanks, the three-day Paris Peace Forum will look into several issues related to international cooperation and world peace.
Participants will discuss how to better work together on global issues, as well as achieve “fairer and more equitable globalization, and a more effective multilateral system.”
The forum comes as the current model of international cooperation has shown its limits amid a rise of populism in Europe, the retreat of the US administration from the international stage, and the need to protect democracy.

Posted by Khalid Al Mouahidi on November 10, 2018. Filed under News. You can follow any responses to this entry through the RSS 2.0. Both comments and pings are currently closed.