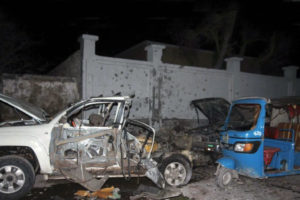 The head of the United Nations Assistance Mission in Somalia (UNSOM) has condemned “in the strongest possible terms” Saturday’s twin bombings in the nation’s capital, Mogadishu, which claimed a number of lives.

In a statement, Nicholas Haysom, the Special Representative of the Secretary-General for Somalia, said that the attacks “signify another cowardly assault against the people of Somalia and their inherent right to live in peace and dignity.”

“We urge the Somali authorities to spare no effort in fighting the agents of violent extremism who bear responsibility for this heinous crime,” he added.

At least 20 people are reported to have died in the twin attacks. Al-Shabaab terrorist group claimed responsibility for the attack, according to UNSOM.

The first of the attacks occurred at a checkpoint near Mogadishu’s National Theatre. Among the fatalities was a Somali journalist with the London-based Universal TV network. Soldiers have also been reportedly killed in the attack.

Posted by Steven Addamah on December 24, 2018. Filed under News. You can follow any responses to this entry through the RSS 2.0. Both comments and pings are currently closed.