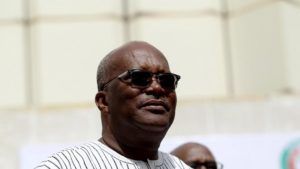 President Kabore made the remarks while meeting with Chinese State Councilor and Foreign Minister Wang Yi in the capital, Ouagadougou.

According to Kabore, Burkina Faso is ready to enhance communications with China to safeguard the interests of African countries and developing countries.

China is Africa’s largest trade partner, with massive investments in mining, construction and banking, though it has been less active to date in Burkina.

China refuses to maintain diplomatic relations with any country that recognizes Taiwan, a self-governed and democratic island off China’s southeastern coast that Beijing considers an integral part of its territory.

In his words, the resumption of diplomatic relations between the two countries has laid a political foundation for bilateral cooperation, and China is willing to work with Burkina Faso to deepen peace and security cooperation.

Wang said that peace serves as the prerequisite and guarantee for the development of the African continent, adding that China has long been mediating in hot-spot issues in Africa and encouraging Africans to solve their problems in their own way.

Posted by Geraldine Boechat on January 7, 2019. Filed under News. You can follow any responses to this entry through the RSS 2.0. Both comments and pings are currently closed.