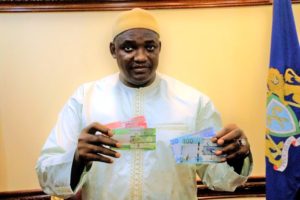 The Gambian Government has unveiled new currency notes without the features of former President Yahya Jammeh.

The new notes include the 5, 10, 20, 50, 100 and 200 denominations and none carries the image of the former president, which has been replaced by a poultry believed to be one of the national birds.

According to the Central Bank chief Bakary Jammeh the notes are equipped with high security features.

The government of President Adama Barrow had made it its priority since it came into authority two years ago to phase out the current denominations in circulation as Gambians complain about the poor quality of the papers.

Many banknotes even those issued from banks wear and tear after a few years in circulation unlike previous ones dating back to the first republic.

Jammeh had criticized his predecessor, Gambia’s first president Dawda Jawara, for printing notes with his face on it – that was done back in 1971. Years on, Jammeh also had his face on the dalasi.

The former Gambian president, Yahya Jammeh, withdrew as much as $45 million (almost 2 billion dalasi) from the Central bank coffers to fund his lavish lifestyle, according to the government.

Jammeh left the country after his over two-decade rule ended in January 2017. He is currently in Equatorial Guinea. He has not commented on the situation back home since he left. The last that was seen of him was when pictures emerged of him working on a farm in the host country.

Posted by Emmanuel Agbenonwossi on August 7, 2019. Filed under Finance, News, Zoom. You can follow any responses to this entry through the RSS 2.0. Both comments and pings are currently closed.