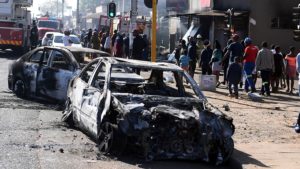 The police in Johannesburg Monday said they have detained over 70 people believed to have attacked shops and cars owned by foreigners.

Police managed to disperse dozens of people who looted shops and burned down cars believed owned by foreigners among whom several Nigerians. Events started earlier in the day as hundreds of people staged a march in Johannesburg’s Central Business District (CBD), demanding foreigners to leave.

The police condemned the looting and the attacks but stopped short to brand them xenophobic.

“Police are condemning all acts of violence directed at the businesses and the looting of shops described as those of foreign nationals by criminal opportunists,” the office of the provincial commissioner said in a statement on Facebook.

“Xenophobia is just an excuse that is being used by people to commit criminal acts,” Police Minister Bheki Cele told reporters on Monday afternoon. “It is not xenophobia, but pure criminality.”

Police said it is still investigating the crime.

In reaction to violence, Nigeria has threatened to retaliate.

“The continuing attacks on Nigerian nationals and businesses in South Africa are unacceptable. Enough is enough. Nigeria will take defensive measures to ensure the safety and protection of its citizens,” the Nigerian government said on Twitter.

There are reportedly more than 120 South African companies in the oil-giant African country.

Posted by Emmanuel Agbenonwossi on September 3, 2019. Filed under Business, News, Zoom. You can follow any responses to this entry through the RSS 2.0. Both comments and pings are currently closed.