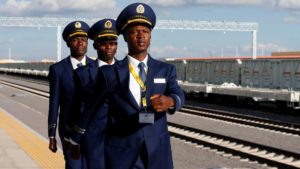 Kenyan President Uhuru Kenyatta is expected to commission the extended railway line that is a key component of the proposed Mombasa-Nairobi-Malaba SGR project.

The 120 km stretch has been built by the China Communications and Construction Company at a cost of $1.4 billion.

According to The Business Daily newspaper, passenger services will be available in four of the 12 stations.

Note that the Standard Gauge Railway, a $3.2 billion rail line, is the country’s largest infrastructure project since independence. Eventually it will extend to Uganda, Rwanda, South Sudan and Ethiopia, placing Kenya at the center of an East African rail network.

The Standard Gauge Railway line project has cost close to three times the international standard and four times the original estimate, according to local newspapers. The government explained the reasons for the high cost include the terrain that required many bridges, tunnels and land compensation.

President Uhuru Kenyatta described it as a new chapter in the country’s history while about 80% of the money for the railway came through loans from China.

The project signals yet more Chinese engagement in Kenya, which is part of China’s “One Belt, One Road” initiative, to build land and sea transport links across the world. For the first five years, China Communications Construction Company will manage the railway’s operations while training local engineers and staff.

Posted by Emmanuel Agbenonwossi on October 16, 2019. Filed under Business, News, Zoom. You can follow any responses to this entry through the RSS 2.0. Both comments and pings are currently closed.