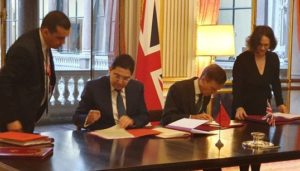 To ensure continuity of its trade and economic relations after the Brexit, the United Kingdom signed on Saturday in London with Morocco an Association agreement, building on the two countries deep cultural, political and economic ties

Signed by UK Minister of State for North Africa Andrew Murrison and Moroccan Foreign Minister Nasser Bourita, the agreement will be subject to parliamentary procedures in both the UK and Morocco before its enforcement.

The deal will ensure British businesses and consumers benefit from continued trade with Morocco after UK leaves the European Union. It provides, among other trade benefits, tariff-free trade of industrial products together with liberalization of trade in agricultural, agri-food and fisheries products.

This agreement replicates the effects of the existing EU-Morocco Association Agreement, both the trade related aspects and the broad scope of the political and cooperation provisions, to ensure continuity in the trading and wider bilateral relationship between Morocco and the UK after the Brexit.

Morocco and the UK have reiterated on this occasion their willingness to further strengthen their partnership and take it to a strategic level. Bilateral trade between the two countries is already worth over £2.5 billion.

Speaking on this occasion, Moroccan foreign minister hailed the sound Moroccan-British relations which are based on friendship and mutual respect as well as a shared history of over 800 years old.

“These relations have undergone, in the last few years, a spectacular and promising evolution”, he added, noting that the signing of the Association agreement is line with the royal vision which insists on strengthening Morocco’s relations with historic partners, while opening up to new partners, both from inside and outside the European Union.

For his part, Dr. Murrison welcomed the agreement which demonstrates UK commitment to increase trade and constructive dialogue with Morocco, saying the deal will give exporters and consumers the certainty they need to continue trading freely and in confidence as the UK prepares to leave the EU.

The agreement seeks to deepen UK-Moroccan cooperation across foreign policy, economic, social and cultural ties. It provides a framework for policy dialogue and to strengthen cooperation on important issues like trade, educational and environmental matters.

The UK and Morocco agree that the Association Committee, established under the Association Agreement, should work towards the ambition to strengthen the UK-Morocco trading partnership.

The two parties also established under the Agreement an Agricultural Committee, a Customs Cooperation Committee and an Industry, Trade and Services Committee, which could meet immediately after the application of this Agreement.

Posted by Hafid El Fassy on October 28, 2019. Filed under Business, News, Zoom. You can follow any responses to this entry through the RSS 2.0. Both comments and pings are currently closed.