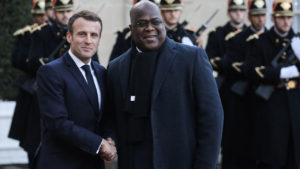 French President Emmanuel Macron has announced support to the Democratic Republic of Congo to enable it tackle armed groups in the east of the country.
Macron made the statement during a meeting with Congolese President Felix Tshisekedi at the Elysee Palace on Tuesday.
“We signed the second agreement on the subject of support for development and peace. France is investing €65 million to assist with the President’s work towards modernization and development,” Macron said.
In his words, we’ve spoken together at length. Firstly, we are on the President’s side where security is concerned, particularly in the East, in the fight against armed groups and groups that practise with IS through the sharing of intelligence and strategic military cooperation focused specifically on the East, as well as through diplomatic action to sanction the leaders of those groups.
He called on neighboring countries like Rwanda and Uganda to engage with President Tshisekedi in the fight against armed groups.
In August, the members of the Security Council have reaffirmed their strong commitment to the sovereignty, independence, unity and territorial integrity of the DRC.

Posted by Emmanuel Agbenonwossi on November 14, 2019. Filed under News, Zoom. You can follow any responses to this entry through the RSS 2.0. Both comments and pings are currently closed.