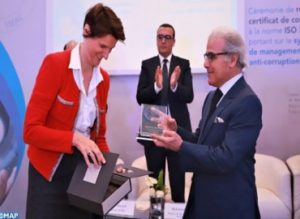 Morocco’s central bank (Bank Al-Maghrib) was awarded the ISO 37001 certification for its Anti-Corruption Management System, for all its core business processes and support processes.

The bank has received this certification following the audit conducted by Euro-Compliance in October 2019, Bank Al-Maghrib said in a press release.

The awarding ceremony was held on Thursday in Rabat, and was attended by Bank Al-Maghrib’s board members, its institutional partners and representatives of civil society.

This ceremony coincides with the celebration of Bank Al-Maghrib’s 60th anniversary.

It also takes place on the eve of the international and national Anti-Corruption days on December 9 and January 10 respectively.

Speaking at the awarding ceremony, the Central Bank governor Abdellatif Jouahri said the bank has a “zero tolerance” policy for corruption and has set up a specific mapping of corruption risks.

Last Month, Jouahri was named by New York Magazine Global Finance among the top ten central bank governors in the world for the third year in a row.

The ISO 37001 certification will further strengthen Bank Al-Maghrib’s actions, in terms of ethics and professional conduct, providing the Bank with an integrated and well-structured anti-corruption system, the release added.

Steered by the Bank’s top management, the system is established around the following main components, namely an anti-corruption policy, published internally and externally, a risk management system related to the Bank’s activities, ongoing awareness and training actions and an ethics alert system open to staff and partners.

Through this system, Bank Al-Maghrib also aims to actively contribute, along with all stakeholders in the financial sector, to building upon the anti-corruption momentum, along the national anti-corruption strategy.

Posted by Hafid El Fassy on November 29, 2019. Filed under Finance, News, Zoom. You can follow any responses to this entry through the RSS 2.0. Both comments and pings are currently closed.