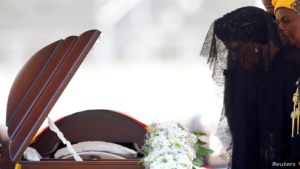 Zimbabwe’s former President Robert Mugabe has left $10 million and some properties in the capital, state-owned newspaper the Herald revealed on Tuesday.

The former president was praised for broadening access to health and education for the black majority in the Southern African nation. But later years were marked by violent repression of his political opponents and Zimbabwe’s economic ruin.

Mugabe was forced to resign days after the army staged a coup in November 2017. At the time, he was the world’s oldest head of state and one of Africa’s longest-serving leaders.

According to the Herald, Mugabe’s daughter Bona Chikowore wrote in October to the Master of the High Court seeking to register her father’s estate, the Herald reported. It listed assets including $10 million held in a local bank, four houses in Harare, 10 cars, one farm, his rural home and an orchard.

The Herald said Mugabe’s lawyer Terrence Hussein had also asked the court to register the estate, saying he and the family had not found any will left by Zimbabwe’s founding leader.

Under Zimbabwean laws, the estate of a person who dies without a will is distributed between their spouse and children.

Mugabe, obstinate and self-righteous to the end, never accepted responsibility for the damage he caused to his country.

Posted by Emmanuel Agbenonwossi on December 3, 2019. Filed under News, Zoom. You can follow any responses to this entry through the RSS 2.0. Both comments and pings are currently closed.