Agadir being turned into an attractive & competitive economic hub, open onto Africa 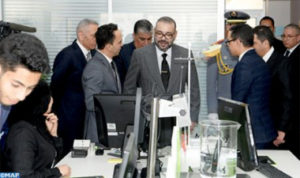 The Moroccan Atlantic city of Agadir is being turned into an attractive and competitive economic hub, thanks to several development projects launched or inaugurated this week by King Mohammed VI.

Among these landmark projects, King Mohammed VI launched the city’s urban development program, worth $62 million. The program aims at consolidating Agadir’s positioning and strengthening its attractiveness as a national and international tourist destination, improving human development indexes, promoting the living conditions of the population, particularly in neighborhoods with poor infrastructure, and consolidating the city’s road network for a better mobility.

This program is being carried out in implementation of royal orientations, as expressed by the Monarch last November in a speech marking the 44th anniversary of the Green March.

The King had then called for upgrading the basic infrastructure of the Souss-Massa region and its road network, the establishment of a Marrakech-Agadir rail link and the consolidation of the strategic position of the region.

“I invite the authorities concerned to give serious thought to the development of a rail link between Marrakech and Agadir, as a first step before extending it to the rest of the southern regions,” the King had said in his speech, adding that “the Souss-Massa region must become an economic hub linking Morocco’s north to its south – from Tangier, in the north, to Oujda, in the east, to our southern provinces, in the south.”

Implementing the urban development program, which is also part of the regionalization strategy, in the Souss Massa region is not fortuitous. The region boasts abundant economic assets, and enormous potentials enabling it to become a real, attractive and competitive economic hub, capable of meeting the challenge of advanced regionalization and consolidating its influence at the national and regional levels, mainly in Africa.

Among the other structuring projects in the region, King Mohammed VI inaugurated the Souss-Massa City of Innovation, worth $4.3 million. The city hosts business incubators and scientific labs and seeks to encourage entrepreneurship and the creation of innovative start-ups and support the local economic sectors & industrial ecosystems.

The Monarch also launched the construction works of a local City of trades & skills that will train up to 3,000 students a year in various trades and sectors including industry, offshoring, management, marketing, tourism, health…The project will cost over $ 44.5 million.

Out of concern to improve the living and work conditions of fishermen in the Souss-Massa region, King Mohammed VI also inaugurated a new fishing dock in the town of Imourane, near Agadir, that will benefit more than 130 fishermen.

The dockyard includes 52 warehouses for fishermen, five warehouses for fish wholesalers, a fuel station, and a fish market. The project also features repair shops for boats and engines, a refrigeration chamber, an ice factory, and other administrative facilities.

Part of efforts to promote the fishing sector in Souss-Massa, a similar infrastructure was established in the town of Gourizim, near Tiznit, for a a budget of about $2 million. It benefits 80 fishermen from the town, operating 20 artisanal boats. Facilities of the dockyard include warehouses, workshops, a market, a refrigeration chamber, a multipurpose room, and a docking area.

Besides, some 24 aquaculture projects, notably shellfish and seaweed farming, are being developed in several localities in the region.

About $40 million were earmarked for the projects that are expected to create more than 670 jobs and produce nearly 23,240 tons of oysters and 38,660 tons of algae annually.

The projects are part of a large-scale national program for the development of aquaculture and fisheries, aiming to upgrade and modernize Morocco’s fishing sector and improve its competitiveness and performance.

Posted by Hafid El Fassy on February 8, 2020. Filed under Business, News, Zoom. You can follow any responses to this entry through the RSS 2.0. Both comments and pings are currently closed.