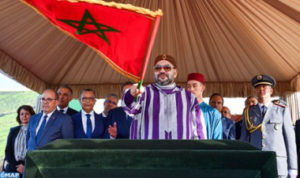 In a follow-up to the Green Morocco Plan launched in 2008 and that fulfilled most of its goals, Morocco adopted a new strategy to promote farming and the sector of water and forests.

The new strategy dubbed the “Green Generation 2020-2030” and the “Forests of Morocco” was launched Thursday by King Mohammed VI, who was accompanied by Crown Prince Moulay el Hassan, from Chtouka Ait Baha, in the Souss Massa region.

The new strategy, meant to give a new momentum to the development of Moroccan farming, is developed in implementation of royal calls for the creation of jobs, promotion of income generating activities in the rural world and for the emergence of an agricultural middle class.

Actually, the new strategy is based on two main pillars: enhancing the human element, by promoting the emergence of a new generation of agricultural middle class (some 400,000 households); and encouraging a new generation of young entrepreneurs, through the development of one million hectares of collective land and the creation of 350,000 jobs for the benefit of young people.

This ambitious plan, which requires a 2.5 pc annual budget increase starting 2020, seeks to bolster farming exports (up to $6 billion) and agricultural GDP (to $25 billion) by 2030.

The new forest inclusive strategy takes into account the importance of the country’s forests, which stretch over 9 million ha, and their environmental, economic and social role.

To reach these goals, the new strategy will associate the local communities in forests management, set up modern forest nurseries, a pole of training & research, a Water & Forest Agency and a Nature Conservation Agency.

The two new strategies will be implemented nationwide starting 2020, according to the specificities and assets of each region, and in coordination with all stakeholders.

Afterwards, the Sovereign launched the planting operation of 100 ha with Argan trees in the commune of Imi Mqouren. This project is part of a $2.5 million program to plant Argan trees in the province of Chtouka Ait Baha over 1,250 ha.

The Monarch also launched on this occasion the construction works of an irrigation network from the Agadir desalination plant to be operational in 2021.

Posted by Hafid El Fassy on February 13, 2020. Filed under Business, News, Zoom. You can follow any responses to this entry through the RSS 2.0. Both comments and pings are currently closed.