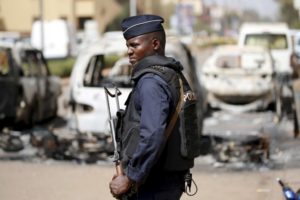 Police in Burkina Faso arrested six “foreigners” suspected of being behind the jihadist attacks in January that left 30 people dead in the West-African nation, police and government officials said on Wednesday.

According to a press statement released by the police on Wednesday, the suspects arrested on Monday had sheltered the attackers, three of whom were killed during the January 15 raid, and were in contact with the mastermind of the plot.

Burkina’s Minister of Internal Security, Simon Compaore, told reporters the arrests were made thanks to intelligence shared by other West African security forces.

On Wednesday, unidentified gunmen killed three police officers in northern Burkina Faso near the Malian border – the second attack on a police station near the frontier in less than a fortnight

According to the police, the assailants launched the attack in the night of Tuesday to Wednesday against Intangom police station in the Sahel region, close to the border with Mali.

In mid-May, two security and defense forces officers were left injured as unknown gunmen attacked a police station at Koutougou, close to borders with Niger and Mali.

Posted by Steven Addamah on June 2, 2016. Filed under News. You can follow any responses to this entry through the RSS 2.0. You can skip to the end and leave a response. Pinging is currently not allowed.