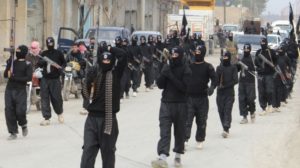 The South African police foiled over the week-end travel plan of four alleged terrorists trying to fly to Syria. They are expected to appear in courts on terror-related charges, reports say.

Hangwani Mulaudzi, spokesman for the Directorate for Priority Crime Investigation indicated that the militants, including one woman, all of them in their 20s, were prevented from flying to Syria to join the ranks of the Islamic State (IS) group.

That is the first time authorities report cases of IS militants in the rainbow nation. For the chief Lieutenant General Mthandazo Ntlemeza of the Directorate, the arrest is a big step in the fight against terrorism.

The four suspects have been on police radar since last year when they attempted to travel to Syria.

Posted by Steven Addamah on July 11, 2016. Filed under News. You can follow any responses to this entry through the RSS 2.0. You can skip to the end and leave a response. Pinging is currently not allowed.