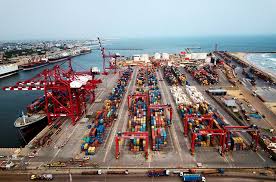 The government of Benin has announced plans to upgrade its major port in capital Cotonou to make it more competitive, reported AFP news agency.

The 300-hectare transit port is the economic heart of Benin, handling an annual freight volume of around 12 million tons.
It contributes more than 60% of GDP and mobilizes more than 90% of domestic resources, AFP said.

The AFP report said the tiny west African nation wants to take advantage of its geographical position to remain a transit point, especially to the Nigerian giant market of 190 million and Niger which has been loyally using its port.

The main task of the government will be to modernize the port authority in organizational terms, and renovate the obsolescent facilities.

During the first two years of President Patrice Talon’s administration, which began in April 2016, the government has followed an ambitious action plan to kick-start development through investments in infrastructure, education, agriculture, and governance.

Posted by Emmanuel Agbenonwossi on August 2, 2019. Filed under Business, News, Zoom. You can follow any responses to this entry through the RSS 2.0. Both comments and pings are currently closed.