Africa calls for action as COP25 kicks off in Madrid 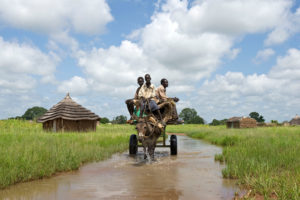 The 25th session of the Conference of the Parties (COP) to the United Nations Framework Convention on Climate Change (UNFCCC) has kicked off this week in Madrid.

The 197 Parties that make up the treaty – 196 nations plus the European Union – will seek to move towards the implementation of the agreements that have been reached under the Convention, which lays down specific obligations for all Parties to fight climate change.

COP25 comes a week after the UN Environment Program (UNEP) released a report warning that unless global greenhouse gas emissions fall by 7.6 percent each year between 2020 and 2030, the world will miss the opportunity to get on track towards the 1.5°C temperature goal of the Paris Agreement.

The annual Emissions Gap Report, which was released on Nov. 26 warns that even if all current unconditional commitments under the Paris Agreement are implemented, temperatures are expected to rise by 3.2°C, bringing even wider-ranging and more destructive climate impacts.

During the Madrid meeting, African civil society organizations will call on governments from both developing and developed nations to play their promised roles in combating climate change.

In Africa, climate change has caused drought, change in distribution of rainfall, the drying up of rivers.

“We’re fatigued by COP [Conference of Parties] jamborees which have become a ritual every year,” said Dr Mithika Mwenda of the Pan Africa Climate Justice Alliance (PACJA) – an umbrella organization that brings together over 1,000 African climate and environment civil society organizations.

The African Development Bank has earlier announced that its participation this year will help mobilize additional resources for climate funds and facilities, support efforts to strengthen the African voice in the climate change negotiations, capitalize on its efforts and experience in promoting climate-compatible development in Africa and strengthen its pipeline of climate change projects.

Posted by Geraldine Boechat on December 3, 2019. Filed under News, Zoom. You can follow any responses to this entry through the RSS 2.0. Both comments and pings are currently closed.