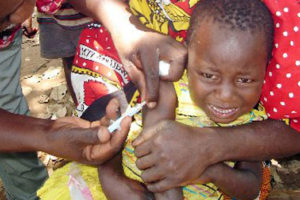 The United Nations migration agency and its partners are set to begin a second round of an oral cholera vaccination campaign in Malakal and Wau, South Sudan, after the initial round reached more than 60,400 people in March of this year.
Following an outbreak in February, the International Organization for Migration (IOM) has also been leading a reactive measles vaccination campaign in Aweil East, which reached more than 83,700 children last month.
“Children are extremely vulnerable to outbreaks of measles and other contagious diseases,” explained Derebe Tadesse, IOM Migration Health Officer. “The measles vaccine will save lives. With just one dose, 85 percent of children over nine months and 95 percent of children over twelve months of age are immune.”
Since the start of the conflict in 2013, protracted displacement and poor health conditions have contributed to yearly cholera outbreaks in South Sudan.
In 2017, IOM reached more than 469,800 people with oral cholera vaccination campaigns in Unity, Warrap, and Eastern Equatoria. With an estimated 5.1 million people in need of emergency health care assistance, IOM continues to work countrywide to provide aid to vulnerable populations affected by the conflict.