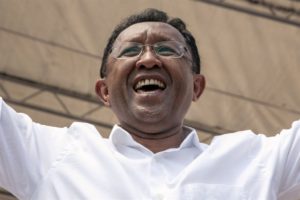 In Madagascar, former presidents Andry Rajoelina and Marc Ravalomanana are qualified for the second round of the presidential election, to be held next month, according to provisional results.

The incumbent President Hery Rajaonarimampianina who is seeking a second term in office grained about 9 percent.

The remainder of the votes were split up between the 34 other candidates. A candidate must win more than 50 percent of the vote to become president.

Lidia Geringer, the head of the European Parliament delegation, described the election as “something of a last chance poll” for Madagascar’s democratic and economic development prospects.

Only 54 percent of the nearly 10 million registered voters actually cast their ballots. According to a World Bank report, more than 80 percent of the population lives in poverty.