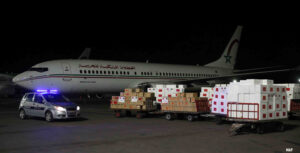 Morocco, at the instructions of King Mohammed VI, has dispatched medical aid to 15 African countries to help them in their efforts to deal with the covid-19 pandemic.

The initiative was hailed by the 15 beneficiary countries and by other diplomats and analysts as a token of Morocco’s unwavering solidarity with the continent, especially after its return to the African Union in January 2017, a date after which it consolidated its existing alliances and forged new ones.

Many journalists, public figures, and African media have expressed gratitude for King Mohammed VI’s move, which translates the significance of solidarity in Africa and materializes how “Africa helps Africa” as put by the Permanent Representative of the Comoros to the African Union.

The African continent, which has been spared the mass outbreak seen in China, Europe and elsewhere, is witnessing an increase in contaminations since the first case was reported in Egypt in mid-February.

The continent is now facing the real risk of the virus spreading rapidly beyond capital cities where health infrastructure is generally weak.