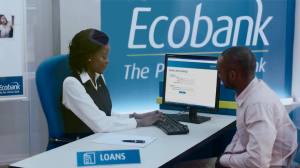 Banker, the banking group of Financial Time magazine has recently published the results of its “Banker Awards 2014”. According to the ranking, it’s the Cameroonian subsidiary of Ecobank, Pan African Bank which was named “the Best Bank of the Year 2014”.  The announcement was made by the director and general manager of the bank, Moustapha Fall at the second edition of Top Managers Kilimanjaro (KTM) in Douala.

In 2013, the assets of the pan-African bank in Cameroon were increased by 27% and 23, 000 new customers were registered, according to the report of the bank.
Moreover, the Share Return has almost tripled from 13, 1 % to 31, 7 %, which has distributed nearly 150 % of dividends to shareholders.

According to the director of the bank, these performances were made possible by a strategy of strengthening consumer satisfaction, creating a framework to allow employees to excel, and the assurance of returns on investment to shareholders.

Ecobank Cameroon is the first bank in the country which has opened a special department dedicated to Chinese investors. The bank also plans to expand its customer base by expanding its branch network to 33 and by setting up a forum where customers can report their problems.

In addition to Cameroon, Ecobank leads in other African countries, including Burkina Faso, Chad, Guinea-Bissau, Mali, Niger and Togo. Moreover, the best bank at the continental level is, according to this classification, the UBA of Nigeria, which also leads in four countries: Côte d’Ivoire, Gabon, Senegal and Sierra Leone.