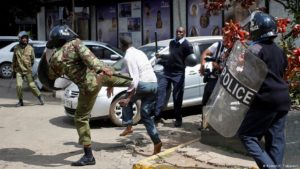 Supporters of Kenya’s opposition party, Coalition for Reforms and Democracy (CORD,) have once again hit the streets on Monday to continue protests despite warning by police after declining the party’s notification.

Unconfirmed reports by the BBC said one person has died at opposition protests in Kisumu, western region of the country.

The weekly protests, which began in April, are against the country’s electoral body, Independent Electoral and Boundaries Commission (IEBC,) which the opposition accuses of being biased and calls for its immediate dissolution.

Last month, three people were killed in demonstrations in the Western part of the country. During a requiem mass for those killed in the clashes, the opposition accused police of using excessive force against innocent Kenyans.

The protesters are demanding the electoral body be scrapped and a new one be appointed.

Local media reports that one of the leaders in the opposition alliance is threatening to increase the frequency of protests.

The opposition accuses IEBC of rigging the last elections in which the presidential results were contested at the country’s highest court.

The Coalition for Reforms and Democracy (CORD) has been adamant that they will not participate in the country’s 2017 elections.