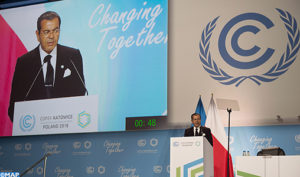 King Mohammed VI of Morocco has once again called international partners to grant more support to Africa, a victim of climate change.

“The African continent is severely affected by the negative impacts of climate change even though Africa bears no responsibility for this unjust situation,” said the Sovereign in a message he addressed to the 24th Conference of the Parties to the United Nations Framework Convention on Climate Change (COP24), which opened Monday in Katowice, Poland.

“Africa is not getting support from international partners and donors,” he deplored adding that Morocco, guided by its commitment to African causes, “is assisting with the actual setting up of the three climate commissions created by the Summit of African Heads of State and Government held on the sidelines of the 22nd Conference of the Parties on climate change. They concern the Congo Basin, the Sahel region and Island States.”

“Because of the magnitude of the challenges faced, I think a collective awakening is necessary. It should help us reinforce solidarity between countries and make sure the transition towards an appropriate economic model becomes a reality,” the King said in his message that was read out by his brother, Prince Moulay Rachid.

Expressing hope that this COP24 will reinforce the commitment already made by the international community regarding climate change, he said, however, that “today, the goal is no longer simply to reiterate our commitments.”

“It seems to me it is crucial to take concrete, proactive measures through constant mobilization for the benefit of developing countries in terms of the transfer of technology and the honoring of financial commitments made to them,” he said.

The Sovereign recalled that as Chair of the COP22, Morocco has worked untiringly to consolidate the momentum created by the signing of the Paris Agreement and has thus sought to ensure the implementation of the Marrakech Action Proclamation for our Climate and Sustainable Development, and of the Marrakech Partnership for Global Climate Action.

Renewing Morocco’s pledges to remain as mobilized and determined as ever, be it at the domestic, continental or international level, the Sovereign said environmental issues and climate-related challenges are priorities in the Kingdom’s national policies.

“My country’s ambition, in this regard, is reflected by its “intended nationally determined Contribution” to reducing greenhouse gas emissions as well as by its National Renewable Energy Program,” King Mohammed VI said.

Posted by Hafid El Fassy on December 3, 2018. Filed under Columns, News, Zoom. You can follow any responses to this entry through the RSS 2.0. Both comments and pings are currently closed.