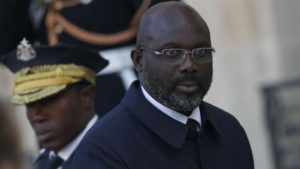 Liberia’s President George Weah has announced that his government was contemplating the establishment of an agricultural bank.

He underlined that his government is committed to transform the lives of Liberians through decisive implementation of the national development framework, the pro-poor agenda for prosperity and development.

Adesina also stated that Liberia was endowed with fertile land and substantial agricultural potential and should not have to spend $20 million annually to import rice, its staple food.

He pledged the Bank’s support to Liberia through the smallholder agriculture productivity enhancement and commercialization project, to create special agro-industrial processing zones close to farmers, where there would be power and water supplies, roads, and facilities to produce and process staple crops, creating more jobs.

More than 60 percent of Liberians depend on agriculture for their livelihood. But the sector has languished due to low productivity, forcing Liberia to import more than 80 percent of its staple foods.

Posted by Emmanuel Agbenonwossi on July 29, 2019. Filed under Business, News, Zoom. You can follow any responses to this entry through the RSS 2.0. Both comments and pings are currently closed.