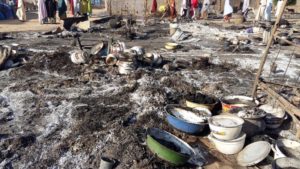 In Nigeria, at least 65 people died in attacks by suspected Islamists in northeastern Borno region, state television reported on Sunday.

According to local government chairman Mohammed Bulama, the assailants killed 21 people returning from the funeral on Saturday and another 44 people when they tried to regroup to defend themselves.

Nigerian President Muhammadu Buhari condemned the attack on Sunday and sent the military to hunt down the perpetrators.

The attack has not been claimed yet by any group. However, Boko Haram and the rival Islamic State in West Africa (ISWA) splinter group have often carried out such onslaughts in the area, according to Reuters.

Since 2009, Boko Haram insurgency has killed tens of thousands and displaced millions, and violence by militants and security forces continues daily.

The United Nations’ refugee agency estimates the conflict has displaced 2.4 million people and put more than seven million at risk of starvation. It has also led to the degradation of infrastructure, including the closing or destruction of more than half of the region’s schools, and the near-complete breakdown of an already weak public health system.

Boko Haram–related violence has largely been confined to Nigeria’s northeast, in Adamawa, Borno and Yobe states. It has been most heavily concentrated in Borno, with the brunt of the violence borne by Maiduguri, Gwoza, and Kukawa. Violence has also become common south and east of Maiduguri, along the border with Cameroon’s Far North Region, and around Lake Chad.