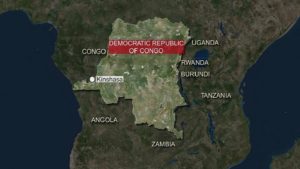 In Democratic Republic of the Congo (DRC), armed groups have killed nearly 1,900 civilians and abducted more than 3,300 others in the eastern provinces of South and North Kivu since June 2017, Human Rights Watch said.

According to a joint report of Human Rights Watch and the New York University-based Congo Research Group, the conflicts in the two regions between June 2017 and June 2019 include violent murder (1,041 incidents with 1,897 victims), mass rape (24 incidents with 100 victims) and abduction for ransom (848 incidents with 3,316 victims).

The Kivus, which cover 67,000 square kilometers and border Burundi, Rwanda, Tanzania, and Uganda, are also a hotbed of anti-government sentiment and activism (North Kivu alone is four times the size of Belgium).

The region is home to the vast majority of the country’s armed groups, all pursuing shifting local and national agendas. Most of the groups are small, numbering less than 200 fighters, but the havoc they have caused over decades, especially in North and South Kivu, have made eastern DRC the epicenter of deadly violence and humanitarian crises.

“over 130 armed groups are fighting for countless reasons in Congo’s eastern Kivu provinces, making the region one of the most violent places in the world,” according to Lewis Mudge, Central Africa director at Human Rights Watch.

DRC President Felix Tshisekedi, on his first trip, in his new role, to the Kivus in April, promised to redeploy troops that have been in the Kivus for a long time, to hold the people supporting armed groups accountable, and to increase support to military operations in the region.

HRW in a statement, indicated that while an estimated 2,000 to 3,000 combatants have surrendered or expressed an intention to do so since Tshisekedi’s inauguration, there is no functional demobilization program for them.

The watchdog said the DRC leadership needs to work towards ensuring restoration of justice in the region, particularly by banning those responsible for mass atrocities from taking positions in the country’s military and establishing a judiciary unit specifically for serious international crimes.

Posted by Emmanuel Agbenonwossi on August 16, 2019. Filed under News, Zoom. You can follow any responses to this entry through the RSS 2.0. Both comments and pings are currently closed.