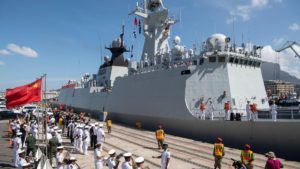 In South Africa, Russian and Chinese warships have arrived in Cape Town for their first naval exercises with South Africa in a demonstration of shifting allegiances.

It is the first time the three countries have held such an exercise, and comes just two years after a PLAN fleet crossed the equator into the Indian Ocean for the first time.

The exercise is scheduled to take place off the southern Cape Coast over the period 25 to 30 November. The drill, code-named Mosi, is meant to train “a multinational task force to react to and counter security threats at sea”, according to the South African military.

According to the South African Navy (SAN), the exercise is primarily focused on maritime economic security, interoperability and maintaining the good relations between the participating navies.

Posted by Emmanuel Agbenonwossi on November 28, 2019. Filed under News, Zoom. You can follow any responses to this entry through the RSS 2.0. Both comments and pings are currently closed.