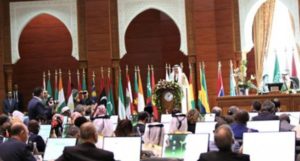 King Mohammed VI has called on Islamic countries to strengthen the bonds of fraternity, cooperation and solidarity to achieve political stability, economic prosperity and social well-being of the peoples of the Muslim Ummah.

In a message addressed to the participants in a ceremony held Thursday in Rabat to celebrate the 50th anniversary of the Organization of Islamic Cooperation (OIC), the Moroccan Sovereign commended the constructive work accomplished by the organization in promoting inter-faith, intercultural dialogue, tolerance, and coexistence between peoples and in combating extremism, one of the major challenges facing the Islamic world.

As inter-Islamic trade has doubled, “I support the development of economic blocs, as a prelude to establishing a free trade area for Islamic countries”, said the Monarch in his message read out by foreign minister Nasser Bourita.

Such an area should reflect the spirit of solidarity and pave the way for comprehensive, sustainable development, he added, urging Islamic countries to adopt a new roadmap that would lead to a quantum leap in the economic, social and environmental sectors.

To preserve the unity of the OIC members and counter sectarianism that fuel extremism and terrorism, King Mohammed VI stressed the need to address the root causes of crises and act in good faith to resolve inter-Islamic disputes to shield the Islamic Organization against the risks of fragmentation and division.

“We should stand up to the parties that are seeking to exploit the crisis in order to foment division or redraw the map of the Islamic world”, stressed the royal message, noting that these parties have been trying to interfere with the destiny of nations and are putting global security and stability in jeopardy.

The Moroccan Monarch, acting Chairman of the al-Quds Committee, also cited the Palestinian cause and renewed his country’s unwavering commitment to defending al-Quds Al-Sharif and Palestine at political, diplomatic and legal levels in order to safeguard the legitimate rights of the Palestinian people.

“Our untiring action to find a solution to the Palestinian question and to the issue of al-Quds stems from a firm belief that peace in the Middle East region hinges on the establishment of an independent Palestinian state, along the 1967 borders, with East Jerusalem as its capital”, underlined King Mohammed VI.

He urged the international community to develop a new roadmap that makes it possible to implement the resolutions of international legality as well as the peace agreements signed.

“I call on the comity of nations to find practical solutions to the crisis in the Middle East in order to end the Israeli occupation of the Palestinian territories within a specific timeframe, in accordance with the two-State solution and in conformity with the relevant international legality resolutions and the Arab Peace Initiative”, stressed the Chairman of the al-Quds Committee.

Posted by Hafid El Fassy on December 12, 2019. Filed under Columns, Zoom. You can follow any responses to this entry through the RSS 2.0. Both comments and pings are currently closed.