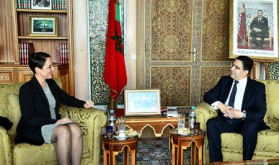 Jamaica’s top diplomat Kamina Johnson Smith has renewed her country’s full backing to the efforts engaged by the United Nations to find an enduring and practical solution to the Sahara regional conflict.

Following her meeting held Wednesday in Rabat with Moroccan peer Nasser Bourita, Mrs. Johnson Smith said Kingston maintains its position taken in 2016 when it withdrew its recognition of the so-called self-proclaimed “SADR”.

“We reiterate our support to the ongoing UN political process aimed at reaching a realistic and pragmatic solution,” she said, calling on the other parties to the Sahara conflict to remain committed, in good faith, to this process.

For his part, Mr. Bourita praised Jamaica’s constructive stand on the Sahara issue which is in line with international legality, saying that Morocco views Jamaica as an important country in the Caribbean region wherein the majority of countries (11 out of 14) withdrew their recognition of “SADR” , a separatist entity, supported by the Algerian regime.