Ivorian president does not rule out running for third term 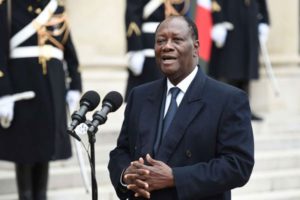 President Alassane Ouattara of Côte d’Ivoire on Monday announced his plan to propose “modifications” to the country’s constitution.

In remarks to foreign diplomats, Ouattara, who has not yet announced whether he will be a candidate in October, said, “In the first quarter of the year, I will put to parliament proposals for modifications to the constitution.”

According to him, the proposed revisions were intended to make the constitution “more coherent … to further consolidate the state of law and bring institutions closer to our fellow citizens”

“I would like to reassure one and all that this is not about ‘stalling’ anyone. As I have said, anyone can be a candidate,” Ouattara added. “I have just turned 78 and I’m not thinking about excluding anyone, myself included.”

Ouattara gave no details but addressed warnings to the opposition about introducing age restrictions that would bar former presidents Laurent Gbagbo, 74, and Henri Konan Bedie, 85, from running for office in October.

In 2016, the Ivorian parliament approved changes to the constitution that ease presidential eligibility requirements. The amendment removed the age limit of 75 for presidential candidates. The opposition denounced the changes.

In recent months, Ouattara has talked about this option several times in private. He argues that the 2016 constitutional change, which imposes a two-term limit on presidents, started the timer over again and that his election in 2010 and 2015 do not count against him.

Posted by Emmanuel Agbenonwossi on January 8, 2020. Filed under News, Zoom. You can follow any responses to this entry through the RSS 2.0. Both comments and pings are currently closed.