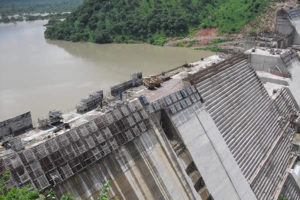 Angola and Namibia have signed bilateral agreements for the construction of a cross border Baynes hydroelectric dam.

The planned hydroelectric dam will be located on the Cunene River on the border between Angola and Namibia.

The reservoir will be located 200 km downstream of the Ruacana hydroelectric power station in Namibia with a capacity of 330 MW. Baynes is a concrete-lined rockfill dam with a height of 200 m. Its reservoir will be 43 km long with a maximum width of 4 km.

The two governments plan to start work in 2021 and commission the facilities in 2025. “If we keep to the schedule of the agreement, we will be able to meet the deadlines, as there is great interest in this bi-national project,” João Baptista Borges, Angola’s Minister of Energy and Water said in a statement.

Namibia and Angola will have to invest $1.2 billion in the project. The 600 MW to be produced by the plant will be shared equally between the two countries.

Posted by Emmanuel Agbenonwossi on April 10, 2020. Filed under Business, News, Zoom. You can follow any responses to this entry through the RSS 2.0. Both comments and pings are currently closed.