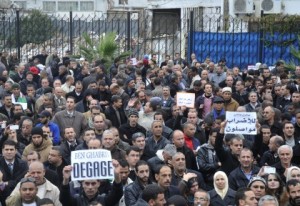 The newly appointed government of Prime Minister Essid is facing a vast movement of teacher strikes on top of the floods in North-West of the country and the cross nation social unrest.

The General Tunisian Workers Union since November 2014 has been leading vast movements of strikes that have left the country almost crippled. The Union is now launching a major strike in the education sector and plans to stall exams in order to claim better salary and work conditions for teachers.

The government and the Union have been engaged in a thug war. The minister of national education Néji Jalloul slams and dismisses the claims of the Union and demands them to schedule and respect the exams planning. On the other hand, Lassad Yaacoubi, the secretary general of secondary school education teachers union says their claims are genuine.

Teachers’ claims are genuine but the new government is unable for the meantime to fulfil teachers’ demands. The government is placing stress on the education infrastructures and a review of the education program. The government is more importantly concerned with creating better living condition for teachers. As a matter of fact teachers in Tunisia do not enjoy the same housing conditions. Teachers working in remote, rural and underprivileged areas live in unbearable conditions compare with their colleagues of cities. Besides, in cities teachers’ conditions also hinge on the courses or speciality they teach. For instance a sports teacher and a civic education teacher cannot afford to make both hands meet at the end of the month.

Posted by Geraldine Boechat on March 6, 2015. Filed under News. You can follow any responses to this entry through the RSS 2.0. You can skip to the end and leave a response. Pinging is currently not allowed.