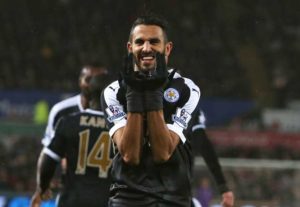 Algerian international Riyad Mahrez has been crowned 2016 African Player of the Year in Nigeria’s capital, Abuja.

“It’s a huge honor to receive this award, I want to thank all my teammates, my family, Africa, and Nigeria as well,” a happy Mahrez said.

Mahrez, 25, becomes the first Algerian and the maiden North African to win the prestigious individual honor in African football since its inception by the Confederation Africaine de Football (CAF) in 1992.

In April 2016, the winger scored 17 Premier League goals as Leicester won the title under Claudio Ranieri, with the Algerian’s exploits earning him the PFA players’ player of the year award.

In August 2016, he signed a new four-year contract with Leicester. Two months later, he was nominated for the Ballon d’Or, finishing seventh.

Mahrez made his international debut for Algeria in 2014 and represented them at the 2014 FIFA World Cup and the 2015 Africa Cup of Nations.