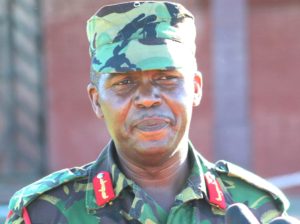 The chief of staff of the Lesotho army has been shot dead in a shooting incident in the capital Maseru on Tuesday, Prime Minister Thomas Thabane said.

“It is with great sadness that I announce the death of General Khoantle Motsomotso,” Thabane said.

Two other senior officers, Colonel Tefo Hashatsi and General Bulane Sechele, were also killed in this exchange of shots, he told the media. This is a serious setback in our important efforts to restore peace and stability in Lesotho, he said.

A military official who declined to be named told AFP that the two senior officers had been denied access to Motsomotso’s office by army guards.

On Tuesday, Colonel Tefo Hashatsi and General Bulane Sechele “attempted to forcefully enter the office of the Chief of Staff, there was a shooting between one of their accomplices, who has since fled, and bodyguards, “said the military official.

The incident occurs days after the leader of the opposition Democractic Congress (DC) Mathibeli Mokhothu and the former deputy leader of the party escaped from the country.

Lesotho’s military have long been tightly entwined with this nation’s political woes. The country has a long history of political instability having suffered coups in 1986 and 1991.

In 2014, it was plunged into crisis when soldiers attempted to oust Thabane during his last stint as prime minister from 2012 to 2015.

Thabane whose party won elections in June this year promised to undertake a series of serious reforms to align the country’s security forces and prevent them from interfering in political affairs.