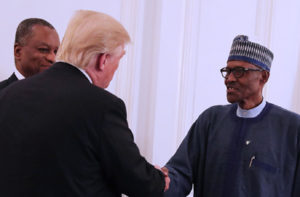 Nigerian President Buhari on Wednesday met his American counterpart Donald Trump on the sidelines of the United Nations General Assembly.

President Trump encouraged Buhari to keep up the good work he is doing, and commended his efforts in the fight against corruption in the West African nation.

Buhari pointed out that large sums of money had been illegally siphoned out of the country and were in the United States, Onyeama said.

Trump assured the Nigerian president of Washington’s readiness to help Nigeria in terms of military weapons to combat terrorism.

The Trump administration in August approved a $600 million sale of high-technology attack planes and equipment to Nigeria despite on-going human rights concerns.

The deal includes 12 A-29 Super Tucano planes, which are described as light attack planes.

Buhari, 74, left the United States on Thursday and is heading to the United Kingdom for routine medical check-up. This is his third medical trip to the U.K. this year.