The Supreme Court of Kenya on Monday unan 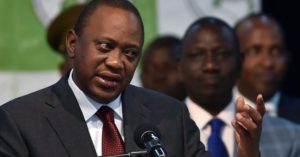 In his reading, the President of the court said they had paid attention to the specific prayers of petitioners as well as constitution in delivering their decision.

The court had nullified the August 8 election on account of illegalities and irregularities. The petitioners had argued that the outcome should be voided because the election board did not seek fresh nominations and because the vote was not held in each of Kenya’s 291 voter constituencies.

The Monday ruling has paved the way for Kenyatta’s swearing in for second term in office on November 28.

The supporters of the opposition National Super Alliance (Nasa) had gathered to welcome home Raila Odinga, from an overseas trip. Odinga has called for a “national resistance movement” to “restore democracy”.