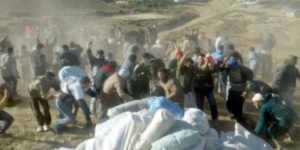 At least 15 people died Sunday near the Atlantic city of Essaouira, and 20 were injured during a distribution food aid operation.

The dead, all of them women, were among about 1,000 people who turned out at a local market to receive food aid from a benefactor.

The stampede occurred when an iron barrier fell down. Local authorities in place to monitor the distribution operation were overwhelmed by the crowd, which kept pushing to get the food ignoring the people who fell on the ground.

Following this tragic incident, King Mohammed VI ordered local authorities to take all necessary measures to provide support and assistance to the families of the dead and injured, the interior ministry said.

The king pledged to cover the burial and hospitalization expenses for all of the victims, the Interior Ministry said.

The ministry launched an investigation into the incident and the benefactor, who organizes the assistance operation every year, has already been heard by the police.