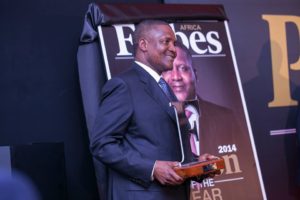 The US Forbes magazine released its annual ranking of global billionaires, showing that 2017 was a record year for the richest personalities on the planet, and also that the list of African billionaires is longer.

The 23 billionaires that Forbes found in Africa, up from 21 last year, cumulated assets valued at over $75.4 billion, compared to $70 billion in January 2017.

The Nigerian cement and commodities tycoon Aliko Dangote tops the ranking for the seventh consecutive year, with a net worth that Forbes pegs at $12.2 billion, up $100 million from a year ago.

Dangote is followed by Nick Oppenheimer. The South African, who is best known in the diamond industry, is credited with a fortune estimated at 7.7 billion.

Nick’s compatriot, mining tycoon Desmond Sacco, chairman of listed Assore Group, returns to the list. Sacco last appeared as a billionaire on the Africa’s Richest list in 2012 and in 2014 with a $1.4 billion fortune.

His compatriot and newcomer Michiel Le Roux, the founder and former chairman of Johannesburg-listed Capitec Bank Holdings has joined the list as a new billionaire worth $1.2 billion.

Another newcomer is Zimbabwe’s telecom magnate Strive Masiyiwa, who chairs the Econet Group.

In North Africa, Egypt’s Nassef Sawiris of Orascom Telecom Holding (OTH), an Egyptian telephone and new technologies company active in the Middle East, Asia and Africa, comes in fourth with $7 billion from its investments in construction and the chemical industry.

The top quintuor is completed by another Nigerian, Globacom boss Mike Adenuga, with a fortune valued at 5.3 billion.