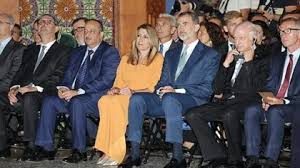 King Filipe VI of Spain stressed the close relations between Morocco and Spain and the need to transform common challenges into opportunities of an ever close partnership.

“Relations between Morocco and Spain are strategic because we are neighbors who have shared concerns and who face common challenges and threats that we can transform together with willingness and determination to opportunities of a close cooperation,” said the Spanish monarch at the opening of the 5th World Congress of Middle Eastern Studies (WOCMES) held in Seville.

The event was attended by Advisor to King Mohammed VI, André Azoulay, along with 3000 researcher and academics from 100 countries, gathered to discuss current issues and challenges facing the region.

On this occasion, King Filipe VI said that Moroccan-Spanish friendship is built on “the solid foundations of mutual trust and respect as well as on strong cultural affinities.”

The Spanish Monarch also lauded the interest he shares with King Mohammed VI to offer their patronage of the foundation of three cultures of the Mediterranean, which stands as a landmark edifice in Seville.

The foundation was created in partnership between Morocco and the regional government of Andalusia as “a shining example of what Moroccans and Spaniards can achieve when they bring together their efforts.”

Speaking at the same event, Advisor to King Mohammed VI André Azoulay underscored the special character of the meeting at the heart of Andalusia “where dialogue, otherness and diversity have an echo that recall what Paul Valéry wrote long ago to tell us that whatever the odds of history or the present, the Mediterranean has always been and will always stay a chosen space where civilization is forged.”