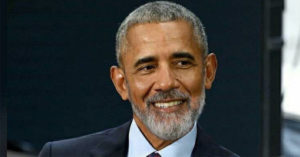 Former US President Barack Obama on Wednesday told young African business people and activists at a gathering in Johannesburg that opportunities could be greater in their own countries.

Obama, whose Kenyan-born father studied in the United States, advised young Africans to drive change at home rather than emigrate. The former president, who is on his first visit to Africa since leaving office in January 2017, also urged African leaders to do more to curb brain drain.

“Precisely because there may be less of a concentration of talent, […] your chances of being transformative are going to be higher,” he said, according to Reuters. “If we have African leaders, governments and institutions that are creating a platform for success and opportunity, then they will have more and more talent wanting to stay,” He added.

The African continent’s total population, which sat at roughly 1.2 billion in 2017, is expected to nearly double to 2.3 billion by 2050.

Obama, who has focused much of his attention on developing the continent since leaving office, said his non-profit group, the Obama Foundation, will continue sponsoring a leadership program aimed at helping talented Africans find solutions to the continent’s problems.

Obama attended in Johannesburg the celebrations marking the 100 years since the birth of the late anti-Apartheid activist, Nelson Mandela.