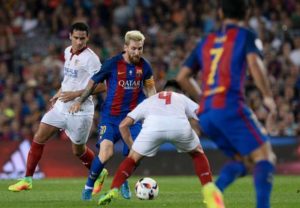 The Moroccan city of Tangier will offer an arena on August 12 for the Spanish Super Cup to oppose FC Barcelona of World legend player Lionel Messi and Copa del Rey runnup Sevilla.

The city’s Ibn Battouta stadium will host the game.

The Spanish football federation in a statement issued on Sunday confirmed the choice of the Moroccan city as first host of the final.

“The Tangier Stadium is one of the modern facilities of our neighboring country and has a capacity for 45,000 spectators.

“It was inaugurated in 2011 with a friendly match in which Atletico Madrid participated.”