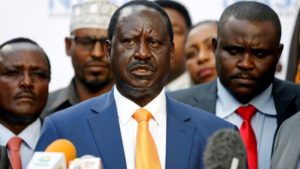 Local media reported that Senator Orengo, together with other members of the opposition, confirmed Odinga’s intentions to launch a fifth bid at the presidency in 2022.

“We are rebranding our party leader to contest on an ODM party ticket in 2022,” Mr Orengo, who is also the Leader of Minority in the Senate, told a gathering in Kakamega County.

The former Prime Minister commands a massive following across the country and would win the election to become the country’s fifth president, he said. Uhuru Kenyatta and Odinga have in the past maintained that the March 9 peace deal did not include 2022 succession. The March handshake between the two leaders has been the subject of debate in the East African nation.

President Uhuru Kenyatta on Wednesday regretted that some politicians had misinterpreted the deal — formalized after the gazettement of a 14-member Building Bridges to Unity Advisory Task Force in May — as a political pact.
Those criticisms are misadvised, Kenyatta said, and insisted that his deal with Mr Odinga was not a political pact, but one that would help Kenya.