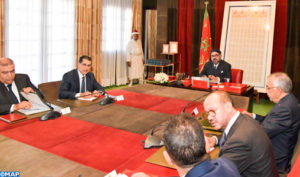 Less than two months after he sketched a roadmap to address youths’ unemployment and remedy the shortcomings of the educational system and training programs that leave graduates on the dole while businesses are having difficulty finding the skilled resources they need, King Mohammed VI chaired on Monday a working session dedicated to discussing the overhaul of vocational training and education to enable young trainees and graduates find jobs easily and contribute to the country’s socioeconomic development.

During the working session, the King was briefed about the proposals and measures to be taken by the concerned departments to speed up implementing the royal roadmap. The roadmap calls for restructuring vocational training, creating a new generation of training centers for young people, vocational and career guidance for students, foreign languages learning, and the promotion of youth entrepreneurship, among others.

During the meeting, the Monarch gave his instructions for the development of new trainings in promising sectors and businesses, while upgrading training in the traditional trades, which remain the main providers of jobs for young people such as the sectors of industry, services, construction, agriculture, fisheries, water, energy and handicraft.

He insisted on the need to diversify vocational training offer, by adopting new standards of quality, notably in the hotel and tourism sector, a strategic sector in Moroccan economy, as well as in paramedical professions, including the training of technicians in medical equipment maintenance and repair, where employment prospects are promising.

The sovereign underlined also the necessity to develop short-term training programs for periods not exceeding four months, integrate foreign languages learning, and technical modules for people with experience in the informal sector, with a view to give them the opportunity to access the formal sector and enhance their know-how and abilities.

At the end of the meeting, the Monarch ordered the ad-hoc committee, which is chaired by the head of Government, to elaborate and submit, within three weeks, detailed projects and accurate measures that can be applicable immediately to upgrade vocational training.

The Monarch had sketched out the roadmap to upgrade the educational system and vocational training, which he deems as strategic levers for youth employment and professional integration in a speech on the occasion of the Revolution of the King and the People last August 20.

“We cannot let our education system continue to produce unemployed people, especially in certain branches of study, where graduates – as everyone knows – find it extremely hard to access the job market,” the King had then said, making it clear that enabling young people, the country’s true wealth, to engage in social and professional life is not a favor.

The Monarch had called on the government and other stakeholders to take a series of measures as soon as possible to address “the chronic problem” of ensuring that skills match labor market needs and also to reduce joblessness.

“Further attention therefore needs to be given to vocational training at all levels, and to creating a new generation of centers for the vocational training of young people, keeping in mind current needs as well as the particularities and expectations of each region,” the King had said.

The Sovereign had also underlined the importance of carrying out a thorough review of vocational training programs to align them with the needs of businesses and the public sector, and to make sure they are adapted to changes in industry and trades in general, thereby increasing the chances of graduates to access professional life.