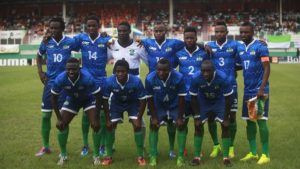 Sierra Leone football team has been disqualified from the preliminaries for the 2019 African Nations Cup finals.

The fate of the West African country was decided by the Confederation of African Football (CAF) on Monday after the nation was suspended by FIFA.

The Anti-Corruption Commission (ACC) says that under Sierra Leone law, both Johansen and Christopher Kamara must vacate their posts until their case on corruption-related charges concludes.

The Leone Stars were unable to fulfil their last three qualification matches, and have now officially been withdrawn from the competition.

Kenya, who will make a first Nations Cup finals appearance since 2004, heads the revised three-team qualification pool with seven points.

The 2019 finals have been plunged into uncertainty and chaos after CAF last week stripped Cameroon of the right to host the tournament, citing delays in completing infrastructure work.

Over recent months, the confederation has repeatedly stated that they were not satisfied with Cameroon’s preparations.