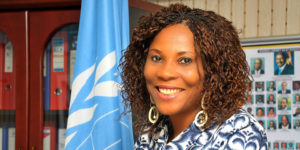 Africa is at a “tipping point” as global warming increases, and urgent action needs to be taken across the continent now, to mitigate risks and safeguard a decade of social and economic gains, according to a new report launched by the United Nations Development Agency (UNDP) at the just concluded COP24 climate conference, in Katowice, Poland.

For two weeks (Dec.2 to 14), the conference has brought together thousands of climate action decision-makers, advocates and activists, with one key objective: adopting global guidelines for the 197 parties of the 2015 Paris Agreement, when countries committed to limiting global warming to less than 2°C – and as close as possible to 1.5° – above pre-industrial levels.

Ahunna Eziakonwa, Director of UNDP’s Africa Bureau made the tipping point analogy, while noting that despite major structural inequalities, nations across the continent have achieved “impressive economic, political and social growth in recent decades.”

But she argues that “climate change, droughts, floods, changing rainfall patterns and conflict have the potential to unravel efforts to reduce hunger and achieve the goals outlined in the Paris Agreement, and the 2030 Agenda for Sustainable Development.”

The UNDP study shows that, should the world fail to limit global warming to less than 2°C, families will find it harder and harder to feed themselves, and the risk of famine and increased poverty will rise along with temperatures.

Higher levels of poverty would further limit the capacity of communities to manage climate-related risks, according to the report, placing further stress on already overstretched coping mechanisms, and could translate into more risky migration patterns, serious epidemics such as the 2014 Ebola outbreak across West Africa, and greater political instability.

Drawing on years of data from projects geared to enabling communities to adapt to a changing climate and build resilience, the report shows that as emissions continue going up, support for climate adaptation initiatives must be increased urgently and accelerated across the continent, especially across the 34 African “least developed countries.”

“They are among the most vulnerable to climate change, yet the least able to adapt. In many cases, they lack the technical, financial and institutional capacity to identify the best ways to build resilience,” said Gustavo Fonseca, from Global Environment Facility, an institution that has been funding many climate adaptation projects in Africa.

According to recent estimates from the Food and Agriculture Organization of the United Nations (FAO), for the first time in over a decade, world hunger is on the rise, affecting 11 per cent of the global population. This is in part due to extreme droughts induced by an abnormally strong El Niño cycle, which led close to 40 million people in Africa to be in need of humanitarian assistance.

“Taking reactive approaches to food security and disaster recovery costs the people of Africa billions of dollars in lost GDP, and syphons off government resources that should be dedicated to education, social programs, healthcare, business development and employment,” said UNDP’s Ahunna Eziakonwa. “It cannot be an afterthought.”

However, measures to enable communities to adapt to the changing climate is a costly matter that will require creative financial mechanisms and substantial engagement with the private sector to meet. It will require developed nations to make good on their 2015 Paris Agreement commitments to dedicate $100 billion annually to supporting climate action in developing nations.

The report analyses a number of noteworthy successes in climate change adaptation in Africa over the past decade, including projects aimed at improving food security in Benin, Mali, Niger and Sudan; supporting governments in having improved climate information and early warning systems to save lives from fast-acting storms; and empowering women to be effective climate action champions.