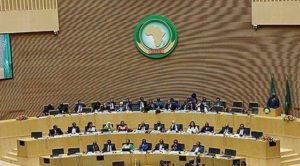 An AU statement also said Angolan ambassador Matias Bertino Matondo was appointed as the new Special Representative and Head of Office for the African Union in the Central African Republic.

The Angolan diplomat will replace Bedializoun Nebié Moussa, who has been called to other functions, the statement said, adding the post in Sudan has been vacant.

About Khalid Al Mouahidi 3852 Articles
Khalid Al Mouahidi : A binational from the US and Morocco, Khalid El Mouahidi has worked for several american companies in the Maghreb Region and is currently based in Casablanca, where he is doing consulting jobs for major international companies . Khalid writes analytical pieces about economic ties between the Maghreb and the Mena Region, where he has an extensive network