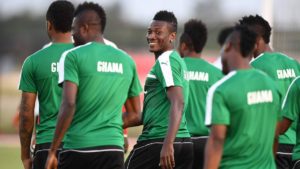 Football fans across the world are paying tribute to Asamoah Gyan, the Black Stars’ all-time leader in appearances and goals, who announced his international retirement on Monday.

The Kayserispor forward who made his debut in the national team more than 16 years ago has decided to hang up his international boots upon consultation with his family and team.

“I have represented the proud colors of our country in 10 major tournaments from the Olympics, World Cups and in African Nations Cups with different coaches […] But today, I wish to retire from the national team permanently,” Gyan wrote in a statement.

The player added the last few years as captain of the Black Stars under head coach, Kwesi Appiah, have been the “proudest moments” in his career.

He said he will continue to serve the country Ghana in other endeavors as a businessman through various investments.

The Kayserispor striker has been part of every AFCON since 2008 on home soil and has captained the Black Stars at three different competitions (2013, 2015 and 2017).

The 33-year-old netted 51 goals in 106 international appearances, both Ghana national team records, which includes scoring at six consecutive Nations Cup finals, as well as three World Cups between 2006 and 2014.