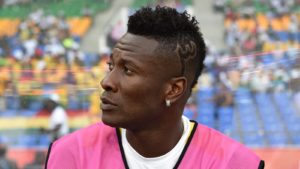 The Captain of the Ghana Black-Stars, Asamoah Gyan has backtracked from his decisions to retire from the Black Stars following an intervention from the President.

In a statement, the former skipper said “I have spoken to President Akufo-Addo in good faith and will now make myself available for selection by coach Kwasi Appiah”.

The President on Tuesday phoned the player who had announced his retirement following a misunderstanding with the coach over the captaincy of the team.

“My desire to help Ghana end the over three-decade-long wait to annex the AFCON trophy still burns strong, and I remain committed to serving this great nation and the people of Ghana,” said the 33-year-old.

Gyan has been the main heart and soul of the Black Stars team for the last decade. The 33-year-old has attained cult status and is widely respected by everyone locally and internationally as a whole.

He is the Black Stars all-time top scorer with 51 goals in 106 appearances. He represented Ghana at seven Africa Cup of Nations and three FIFA World Cup tournaments.

Ghana have been drawn in Group F for the continental decider in June and July, alongside defending champions Cameroon, Guinea Bissau and Benin.