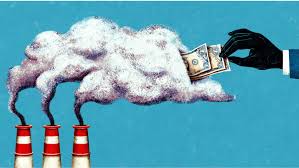 South Africa’s long-delayed carbon tax will be implemented on 1 June 2019. The bill has been enshrined in law, the treasury said on Sunday.

The carbon tax has already been postponed at least three times since first being mooted in 2010, after mining companies said it would erode profit.

The tax will be introduced in phases: The first phase will run until December 2022 and will tax carbon at a rate of about $8.34 per ton of CO2 equivalent. However, according to a statement from the National Treasury, tax breaks will significantly reduce the effective rate of the tax.

The carbon tax would be based on fossil fuel consumption, industrial process emissions, as well as fugitive emissions—all of which are not regularly or consistently measured by many South African taxpayers.

South Africa ratified the Paris climate change pact three years ago and has pledged to cut emissions by almost half by 2030, The legislation has been drafted so that a taxpayer would be required to account for its annual emissions and determine its carbon tax liability accordingly.

South Africa ratified the Paris climate change pact three years ago and has pledged to cut emissions by almost half by 2030.